5 Wrecks to Visit When Diving in the Turks and Caicos 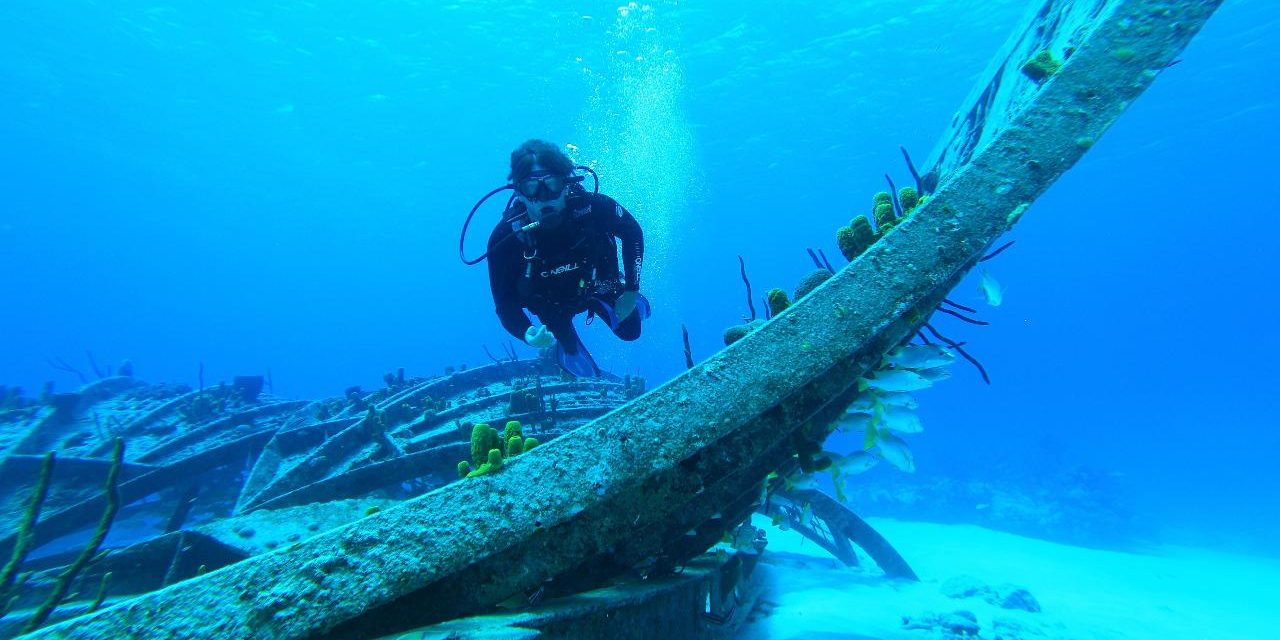 The Turks and Caicos and diving are synonymous with each other. If you’re planning a Caribbean dive adventure, and you’re looking for something a little off the beaten track, why not add these spectacular wreck sites to your itinerary? While the TCI is best known for its exquisite reefs and tumbling walls (and you certainly need to drink in their beauty)m we have some spectacular historic wrecks to enjoy too. Not sure where to start? Here’s the Big Blue Collective’s 5 favourite Turks and Caicos wreck sites, plus a bonus snorkelling adventure you’re sure to love.

Your diving dream holiday awaits you in the TCI

The Turks and Caicos waters are perfect for exploring wrecks. Crystal clear, and with good visibility near year-round, there’s plenty to enjoy. We have the reefs to ‘thank’ for many of the best wreck diving sites on the islands. In fact, some estimates suggest over 1000 ships have downed in the sometimes treacherous waters around the islands! The northwest of Provo, in particular, was so treacherous for passing ships that a wreck salvage station was opened here in the 1800s. It will come as no surprise that this is one of the best areas to dive for wracks even today.

While some sites are perfect for divers of all levels, others will need you to have advanced diving experience before you can tackle them. Sadly, we also have a few that are too deep to explore through diving, although underwater archaeologists have made some interesting finds from them. It’s important to mention that many of the wrecks below are protected historical sites, so you cannot remove any artefact from the area. Remember that responsible tourism starts with you!

This is one of the most famous wreck diving sites in the Turks and Caicos, and rightly so. She’s a 44 gun British warship that was downed in 1790 near Salt Cay. The ship struck a reef, but took three days to actually go down, so all her crew was saved. It’s a dive of 12.5M (40ft), and the most notable features still clearly visible today are her chain and anchor.

You can make this an exciting 2-for-1 adventure, as the General Pershing also downed on the same rock (now called Endymion Rock) in 1921. This wreck features one of the very first shipborne diesel engines.

You will find the remains of this twin-engine aeroplane about 16m (55 ft) underwater off South Caicos. She downed in 1978, and today you’ll find remains of the fuselage and other wreckage to adventure in. It’s one of the easiest wreck diving sites in the Turks and Caicos, and accessible to almost all divers.

The Lucky Lady and Cessna 401

In another 2-for-1 adventure diving experience, you can find these two relatively modern wrecks just off Salt Cay. Sunk in 2010 (intentionally) to provide an artificial reef and diving site, they’re no less of an adventure to explore. Cessna 401 had originally crashed into a Salt Cay salina, with everyone on board safe. The Lucky Lady, a fishing boat,  went down in Hurricane Hanna in 2008, and was relocated deliberately to her new resting site.

This freighter was found abandoned, and sunk deliberately in 1988 just off of the reef at Turtle Cove. The freighter sank more than anticipated, however, and ended up at a greater depth (30-50m, or 90-165ft) than many recreational divers can comfortably dive. If you’re very skilled, however, it’s worth adding this to your Caribbean diving bucket list. The freighter remains intact, and is close to a second site (Southwind freighter), although very little debris remains today.

This diving adventure is a little different. Lying off of Grand Turk, the historic anchor lies in 10m (35 ft) of water. While we don’t know where the anchor came from, it’s at least 100 years old, and makes for a fun snorkelling or diving experience to add to your dream holiday.

Tucked in between French Cay and West Caicos, it’s believed this spectacular wreck went down in 1531. It’s a Spanish caravel, and the oldest excavated European shipwreck in the Western Hemisphere. Sadly, the site is not in the pristine condition we could wish, as unscrupulous looters did considerable damage in the 1970s. There’s very little of the ship itself left after these activities, but it is one of the best snorkelling sites in the Caribbean. Artefacts from this wreck can be seen at the Turks and Caicos National Museum

While wrecks aren’t the primary drawcard for divers in the Turks and Caicos, they make a spectacular way to challenge yourself and have fun with underwater exploration. The islands are one of the few places worldwide where you can dive in shallow water, deep water, dive off of walls, visit pristine reefs, and enjoy a wreck-exploring adventure all in one. After all, that’s why the islands are known as a dream holiday destination for divers!

Are you keen to experience the very best of Caribbean diving? The Big Blue Collective not only offers accredited dive training, but with our full fleet at your disposal, we can organise custom tours to any wreck site or destination of choice. Why not make this year-end holiday season one to remember, and book an adventure holiday with the big Blue Collective today?