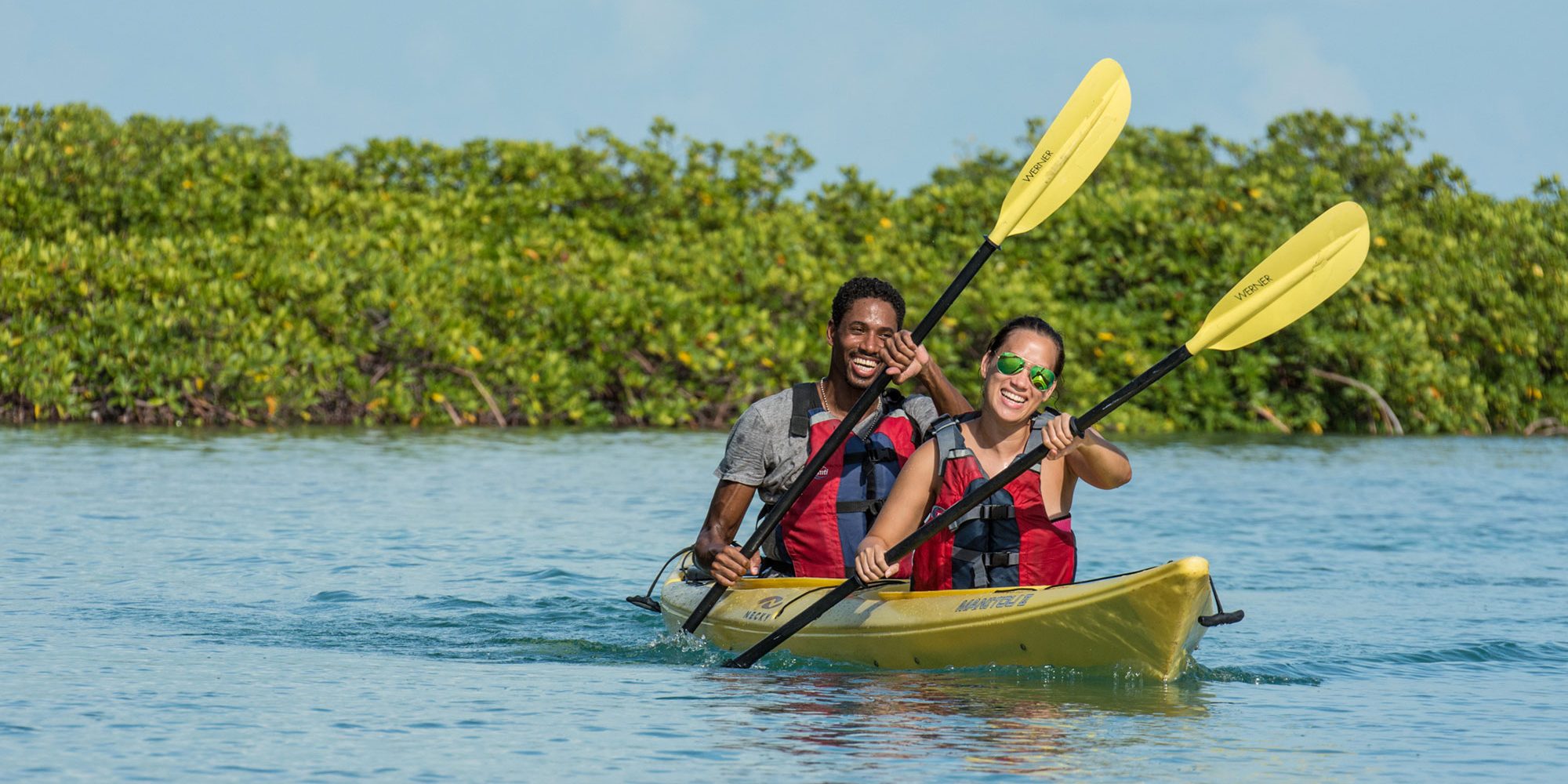 If you’ve not been kayaking in the Turks and Caicos you’re missing out. The islands, and its extensive wetlands in particular are a kayaking haven. And quite frankly it’s really the best option to access vast areas of the islands that are just too shallow, tidal, and pristine to reach any other way.

Since Big Blue’s inception in 1997 we’ve been running kayak tours through the wetlands around Provo and these continue to be some of our mostly popular eco-tours. We’ve explored the nature reserves in the interior of North Caicos with many a guest, and ventured to Joe Grant’s Cay and East Caicos with more intrepid paddlers. For many years we have also kept a handful of kayaks based on North Caicos and South Caicos to access the creeks and coastline there too.

A recent 3-day expedition to South Caicos was exceptional in many ways. In order to use some specialized single touring kayaks from our Provo base we loaded these and a kayak trailer onto our adventure boat Live & Direct and sped eastward across the banks a few days in advance. Our friend and local fisherman Tim Hamilton provided our land transport and boat support on South Caicos for the rest of the trip.
Our guests arrived via charter flight from Provo and we settled in at the East Bay resort. We were the first official guests after the autumn hurricanes had caused damage and temporary closure but you wouldn’t know it. They had done a phenomenal job cleaning up the beach and grounds, and apart from a few quirks the accommodations were as clean, comfortable and functional as always. The service and food was of a high standard, and all the staff went out of their way to facilitate our needs.

Breakfast was greeted with an inspirational dawn over the Turk’s passage. Omelettes to order came quick and scrumptious, and with packed lunches in hand we were quickly off on our day’s adventure. We drove ourselves and kayaks to the northern tip of the South Caicos peninsula where a launching point known as Jerry Camp is a pretty as any spot in the Turks and Caicos Islands. In fact you could spend all day in this area and be in heaven. The turquoise waters flow past tidal sand bars and small cays with jaw dropping beauty. Red mangroves and white sandy beaches line the shorelines providing shelter for birds and marine life. Snorkel, kayak, swim, kite and enjoy. But for once we didn’t linger here, we had come to kayak the interior wetlands and islands to the north and it just gets better and better.

Timing the tide is essential in this region of the Caicos Islands and we’d done this perfectly. The spring tides were still rising as we set off in three Epic kayaks to explore the leeward side of the islands. These super lightweight performance kayaks are a hybrid construction of fibreglass, carbon fiber and Kevlar. Strong and durable but not indestructible as I was to find out later in the day. Before long we were gliding through 12 inches of calm water under blue skies admiring the oyster catchers, reddish egrets and royal terns. Fishing this region has been rife for years and several large piles of discarded conch shells line the shoreline. Soon Plandon Cay was behind us and Middle Creek Cay was in our sights. Relatively deep channels separate these islands, funnelling considerable volumes of water between the ocean and the interior. Heavily eroded rocks and limestone headlands guard the entrances and the fast moving water and wave action requires careful passage.

More conch piles, more mangroves and then another channel crossing over to McCartney Cay which is where it really starts to get interesting. We stopped to admire two beautiful egrets interacting in a mangrove bush. Both were reddish egrets, but one was the rare white phase of this entertaining bird which was a special treat. We also spooked some bonefish has we passed through the shallow and sheltered waters. These can be hard to spot if you’re not tuned into their colouration and movement as they blend in so well with the white sandy bottom.

We’d made good time so rather than take a pit stop on McCartney Cay’s southern beach we continued around the lee side and further into the interior. The mangrove habitats start to become denser here and the concentration of wildlife increases. This is the beginning of a wetlands area that stretches up the entire west side of McCartney Cay, into the interior of East Caicos, and over to Hog Cay. It’s a truly vibrant and unspoiled environment.

Once we had penetrated about half way up the length of McCartney Cay we turned around and caught the now ebbing tide back out to deeper waters. Kayaking the ‘ocean side’ of the islands is geographically correct but a bit of a misnomer as the water remains shallow, almost standing depth in most places. As we kayaked up the coast of McCartney Cay we admired the beaches, cliffs and force of the hurricane on the large casuarina trees. These introduced species had lined the beaches in many places but all had been stripped of their leaves and the sand eroded from around their roots. Most had been pushed over and are unlikely to recover but fear not, the much smaller and compact native vegetation had fared very well and continue to cover the crests of the limestone cays.

As we approached the northern end of McCartney Cay I heard a loud thud at the back of my kayak. My first instinct was that an eagle ray had jumped and landed on the back on my kayak by accident, such was the extent of the noise. But on closer inspection it seemed that a needle fish of some variety had slammed head first into the side of the kayak. The little blighter had managed to put a small hole in the side of the vessel right at the water line. One should never leave home without a pump and some duct tape!! On this occasion I had to make do with surgical tape from the first aid kit but it did the trick and stemmed the small steady flow of water coming into my stern hatch. I was not in danger of sinking, the bow and stern hatches are separate watertight compartments, but any added water would certainly slow me down and make me work harder.

We spent some time enjoying the northern tip of McCartney Cay. This area is a gem and one of our favourite locations and beaches in the Turks and Caicos. This is a major outlet to the vast wetlands area previously mentioned. The tidal waters flows in and out creating what feels like a river, lined by mangroves, flowing all the way to Hog Cay. The channel is very clear, wading depth and although fast flowing is fun to swim in. Sand bars become exposed are low tide and limit access by boat. Snorkeling along the edge of the mangroves is decent and you’re going to see some small barracudas and juvenile sharks as well as the usual fish and invertebrate species associated with the mangrove nurseries. The gorgeous beach on McCartney Cay circles around the point and down the west coast of the island. The vegetation made a good place to stash the kayaks for the night and Tim took us back to the East Bay Resort for an afternoon snorkel and welcome sundowner.

Picking up where we left off the previous day we continued down ‘Hog River’, one of the highlights of the circuit. The turquoise channel is just mesmerizing. It’s about 250ft (75m) across and lined by thick red mangrove habitat. We more or less followed this channel for 5 miles until it spat us out near the southern end of McCartney Cay again. There were some memorable encounters along the way.

We followed two narrow side channels off of this main artery. The first opened up into large shallow tidal wetlands that backed onto the dry land of East Caicos itself. And there, resting in a large mangrove bush were five Rosette Spoonbills, not only beautiful but rare too. I’d only seen them in the islands once before and that was in the same area a few years before. Our unexpected arrival startled them and they took off to circle around overhead until we’d moved on and they settled back again in the same bush. It was important to remember the way into this area. There is a small tidal window before you’re left sitting on the mud and it’s easy to get trapped if you get turned around and can’t find the exit. Upon exciting we spotted a Peregrine Falcon in flight another rare find in the TCI.

A good way further down the channel is an old plantation site that likely dates back to the early 19th century. It sits on the shore of Hog Cay in a very picturesque location. Its remote site likely accounts for the fact that it is still standing. The characteristic plantation chimney is intact, and a square wall surrounds the property. It’s still a good paddle back across the flats to reach the eastern cays again and by now the tide was well on its way out. Some walking was required across a gorgeous sand bar as even 2 inches of water is not enough for these super lightweight kayaks.

We kayaked back to South Caicos along the ocean side of the cays enjoying the waters and exposed sand bars around Jerry Camp once again. Carefully strapping the kayaks to the trailer we headed back to town along the bumpy and muddy track. What a great couple of days kayaking. We’d covered a distance of about 18 miles. Most of it was through incredible terrain with the tide and wind in our favour. There were some sections that were a slog, particularly over shallow water with the wind blowing against the tide, but the rewards were worth the effort. We saw no one else along the entire route and nor would we expect to save for passing fishermen in deeper water on route to their hunting grounds off East Caicos.

Although we were using specialized kayaks for this trip, our regular fleet is more than capable of making the journey. On our last day on South Caicos we decided not to kayak but went snorkeling and hiking along the Long Cay National Park instead. We’ll save the tale of that adventure for another day. Needless to say that the wildlife thrives on this side of the Caicos Banks and it’s a fun location no matter the activity. Big Blue runs custom scuba diving, snorkeling, cultural and of course kayaking trips to South Caicos. Please contact us for details and pricing.