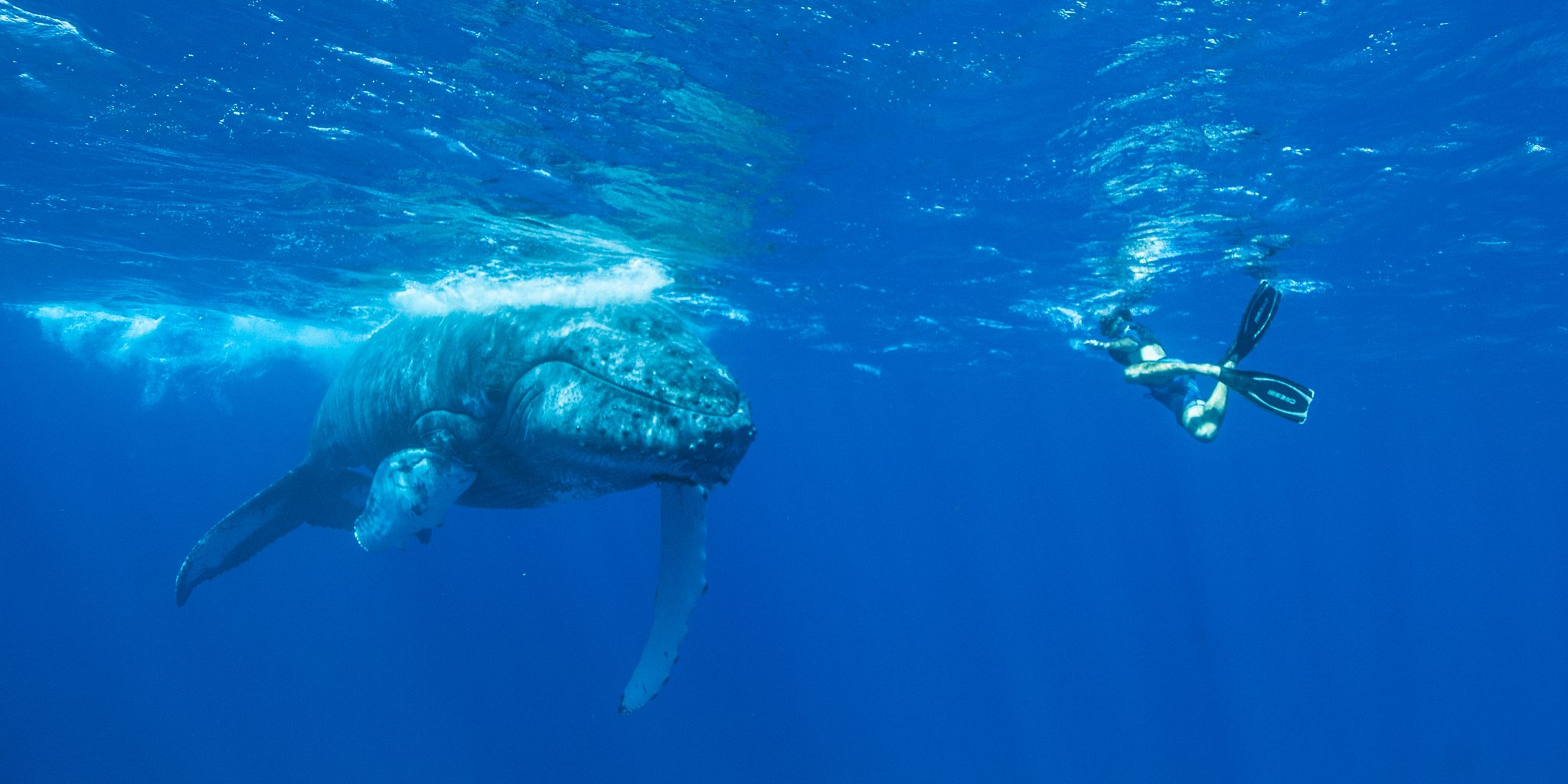 Every winter when our season starts, most, if not all of us, start thinking ahead to the return of the humpbacks. Shared memories and stories from previous years only heighten the excited anticipation.

This year was no different. With good reason too. Literally nothing we do either on, under or over the water, compares to swimming with whales. We all want it; we all crave it. As Thanksgiving rolls around, we start counting down the days wondering when, where and which one of us will see the first whale.

The Edge of the Banks and Private snorkel adventure – are always a top choice for whale enthusiasts.

At 7.36am. 17th January, Philip heard the first whale singing off the North Shore. BANG! That afternoon the Little Chill crew and our unsuspecting private charter guests saw their first humpback of 2022, setting the tone for another stellar season. We were all ready but nothing. Not a sign. Not a sound. Days went by. The early arrival was exactly that. Early.

A week later and all that changed. The ocean around Provo exploded into life with song, spouts, and whale sightings. Every day we had multiple surface encounters amplified by four epic in-water encounters. The first, a mother and calf, were languidly going through their breath cycles. They were followed by a loud male singer suspended off the wall. A day later our guests were in again, this time with a single adult and not long after another adult pair swooped by. The migration had finally arrived. Every captain, guide, and guest were chomping at the bit, eager to get out there.

The standout moment of our month?

Our boats, Thunder Cat, Serenity and Kusi watching on as three adult whales put on an awesome two hour show of breaching, tail lobbing, chin slapping and bubble blowing. All typical signs of males trying to assert their dominance in the mating game. Check out the short video.

As February kicked in, things only got better with different whale encounters almost every single day. Twelve of which ended up with our snorkellers in the water, face to face with these gentle leviathans. Mothers and calves, adult pairs, and smaller groups of 3-4 were being sighted as the humpbacks swam east outside the reef towards their mating and calving grounds further south.

Numerous first-time experiences for our guests and newer guides simply heightened the joy across our team.

For us there is nothing better than seeing people returning dockside, grinning from ear to ear, doing their best to describe their experiences.

The male singer witnessed underwater, a perfect example of how life affirming being in the water with these animals can be.

March was on fire with more encounters North, West, East, and South

Over a two-day period, the team had one of our more extraordinary experiences. Sliding in the water off Live & Direct, in the afternoon, Mike, Amanda, and their charter guests looked on in awe as a massive mother and her tiny calf swam around them. Twenty-four hours later, Kaylam, Lily and their guests got in the water with the same mother and calf twelve miles further east. Unbelievable! And if that wasn’t crazy enough, six hours after that, not long before sunset, Philip, and Judy, another eight miles further east, found the same mother and calf again!!!

A true first for us after 25 years of watching whales migrate past these islands.

We see a lot of whales. Identifying takes some skill and experience. The underside of the tail/ fluke is the best way due to clear markings. The pectorals are the same, but one must be in water while the fin on their backs is also useful if one is close enough. In the case of this mother and calf, we were close enough in the water to confirm their identity. (Check the video).

What is most exciting is matching photo ids of whales in our waters with whales id’ed in the summer feeding grounds of the North Atlantic. Last season, for instance, we had a whale matched to a sighting in Iceland!

It’s never over until it’s over. Just when we thought all the whales had left, Mark, Philip and their guests spent an entire morning in and out of the water with another mother and calf.

In truth, trying to describe all our encounters here would take days.

Best leave our INSANE 2022 season edit do the talking. CHECK IT OUT! Once you have out make sure you plan your 2023 whale season with us and BOOK EARLY. February and March are where it’s at and we can’t wait to share it with you.

See you on board.