Everything you ever wanted to know about kite boarding 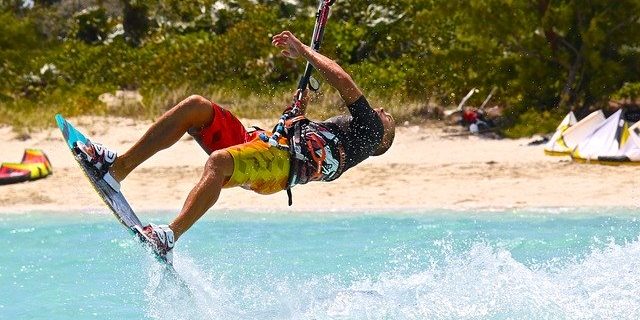 Everything you ever wanted to know about kite boarding

It’s no secret that the Big Blue Collective are in love with the fascinating sport of kitesurfing- but you may not know too much about it. Today we’re taking a closer look at all things kiteboarding… and we’re sure you will fall in love with this magnificent sport too. Better yet, come try it ‘in the flesh’ here in the TCI, and we’re confident you’ll never look back.

Where did kiteboarding come from?

Kiteboarding has deeper origins then you may expect. Even in the 19th century, enterprising folk used sails to propel both land- and water-driven conveyances using the 4-line system fans are so familiar with today. The English Channel was even crossed in 1903 using a canvas boat and a kite! However, it wasn’t until Kevlar and Spectra came onto the market in the 1970s that the sport truly took off. October 1977 saw the first true KiteSurfing patent granted. Sadly there was no commercial interest, but it sparked the interest of some devotees.

Decades of innovation followed. Kite buggying had a hey-day in the 1990s, using a three-wheel buggy/cart with a parafoil-like sail. A few names stand out in kitesurfing history, however. The Roeselers of the U.S and the Legaignoux of France, who both pioneered similar innovations separately. Bill and Cory Roeseler, with ties to Boeing, patented the ‘KiteSki’ system. While it was a far cry from modern boards, it could launch upwind and had water launch capabilities. By the late 90s, it was already a single board not unlike a surfboard.

The Legaignoux brothers were the minds behind the ‘Wipika’ kite, meanwhile. This innovation would later help the development of the bow kite so familiar to many designers. By 1999, kiteboarding could finally claim to be a mainstream sport.

The noughties only saw this fantastic sport grow and grow. We’ve seen the rise of the bi-directional board, kite surfing become a course race, and much more- and now the sport’s eyes are set on inclusion in the 2020 Olympics. It’s already a key part of the Youth Olympics after 2018.

So, what’s the difference between kitesurfing and kiteboarding?

Unless you are a connoisseur, there really isn’t one! You’ll find the two terms user pretty interchangeably among many people- even among ourselves if we are honest! For devotees of the sport, however, there is actually a small difference- kiteboards are strictly ‘twin tip’ boards, a little more like a wakeboard in design, and offer similar performance no matter whether ridden with the left or right tip forward. This ‘technically correct kiteboard’ is also the easiest style to master, and performs brilliantly for cruising, jumping and doing tricks.

Equally strictly speaking, kitesurfing uses a directional board that can only be used with the nose forward. It’s a style specialised for conquering the waves, and is adapted for the extra stress of this activity.

If there is a difference, however small, then why did the two terms come to be used so freely for the same sport? It’s easy- the strictly proper kiteboard is where everyone starts, no matter what their ultimate ambitions may be. Directional boards need you to master your abilities- you need to stay upwind, be able to transition and tackle medium waves, make small jumps, and control your kite instinctively. This makes them the preserve of the intermediate and advanced kite boarder with a good year or more experience under their belt. There’s also a lot more decision making by the time the strict kitesurfing stage has been reached, as this is where you decide if you will be using straps or not.

So, in the end, and if you’re getting technical, all kitesurfers are kiteboarders, but not all kite boarders are kitesurfers. In day-to-day chatter, however, the terms pretty much universally refer to the same exciting sport.

How do I start kiteboarding?

As fully accredited instructors, we recommend starting your kite surfing journey with someone who has already mastered the sport. This not only gives you the benefit of their years of knowledge, but you have a calm, clear head available to you if you get in a pickle while learning- which we all do. A master boarder has had the time (and the amateur upsets of their own) to develop automatic reflexes for the sport, and having one guiding you as you take your first steps will help you get comfortable with your board and learn to enjoy the sport the right way.

If you’re a baby beginner, you’ll typically start out with flat water boarding first. We’ll guide you through the basics, and help you to learn your transitions as well as get comfortable with moving around the board. Over time, you’ll be more and more confident with greater surf. A key issue to watch for is overconfidence… the power provided from the kite can be a little hypnotic, and you don’t want to end up in water you aren’t comfortable with! Every boarder in the world- even the greats- has spent a lot of time swimming, especially as they learned, so always make sure that you are working in water you’d be happy to take a dive into if you get something wrong.

Don’t overthink the process, however, even if you are aiming to become quite competitive in the sport. The Big Blue Collective believes in safe, steady instruction that helps you explore and progress gently and safely, so we’ll help you on the way to mastery of the sport while you enjoy the learning experience.

Kite surfing has a long and fascinating history- and you simply need to be part of it, too. While we hope this informative little article has whet your appetite for the facts, you won’t know how truly spectacular the sport really is until you try it for yourself- so come join the fun in the Turks and Caicos sun with the Big Blue Collective today!