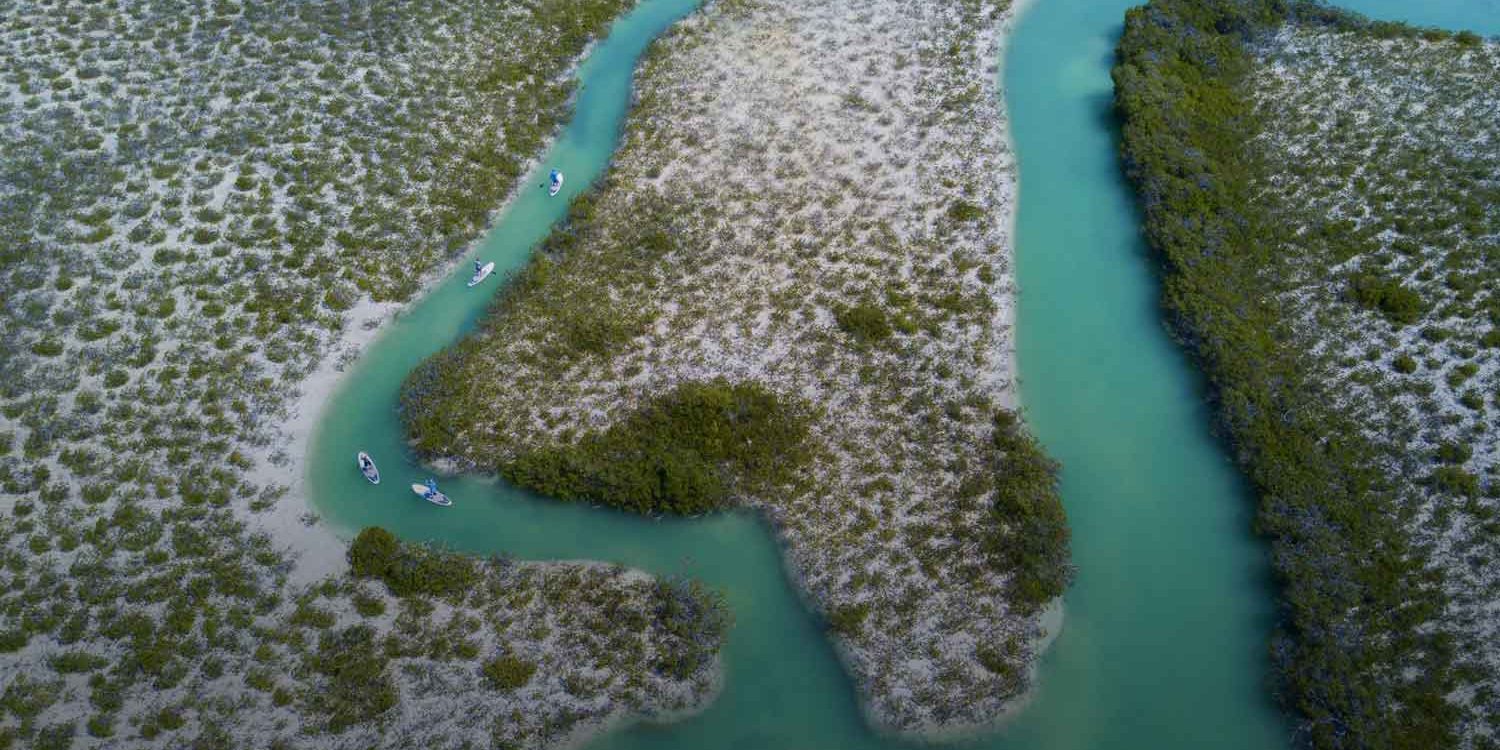 A prestigious team of Geo-scientists from the Jackson School of Geosciences at the University of Texas has been studying the shape, geometry, and variability of the Caicos platform. Of particular interest is the shelf margin that has been modified by sea-level changes which have occurred over the past 400,000 years. During glacial maximums (times of global sea level lows), it is believed that significant wave cut notches developed along the shelf margin at depths of -80 and -125 meters below current day sea level. These notches may be linked to the collapse of large reef blocks that can be observed at recreational dive sites along the leeward margin of the Caicos platform (e.g., Coral Stairway west of Amanyara).

In November 2017 they collaborated with us at Big Blue to conduct a multibeam survey from the north-west point of Provo along the western edge of the banks down to West Caicos and then along the southern edge of the banks to French Cay and onto West Sand Spit. An amazing amount of high resolution data was collected over this 70 mile stretch.

The objectives of the study included:

Multibeam echosounder surveys utilize the same technology as commercial fish finders, but the instruments used by the research team, the Reson model T-50 multibeam echosounder and Edgetech Sidescan sonar, sent a wider signal to enable surveying a swath of the seafloor in 3D down to 400 meters. Our dive vessel Live and Direct was rigged with the echosounder on a fixed arm that transmitted and received data while traveling 4-7 knots along the edge of the shelf boundary. It took 6-days to cover the distance and collect the data. We were blessed with some favourable weather and the data collected was exceptional.

Post-processing of the date was conducted at the University of Texas at Austin under the direction of Drs. Chris Zahm and John Goff. The dataset was combined in a 3D triangulated surface to enable detailed mapping characterization of the shape and geometry of the shelf margin. Here are some of the initial bathymetric maps of West Caicos, Sandbore Channel and the North-West Point areas. There are dynamic ranges of topography on West Caicos (0 to 18 m above sea level), and bathymetry on the shelf (0 to -25 m below sea level), the wall (-25 to -150 m) and slope (-150 m to -350 m). What is very interesting to note is how deep the vertical walls go.  These maps show that the vertical walls descends to almost 400ft/120m which supports data on the extent of the sea-level fall during glaciation. The preliminary map of West Caicos is obtained from the raw data of an individual sounding from the multibeam and includes horizontal contours placed at 120ft/36m. It shows us that as recreational divers we are really only seeing the very top of the wall. Subsequent maps combine data from different runs to provide a more accurate image and we’re grateful for a better understanding of our famous walls. Does this get you excited for your next dive in the Turks and Caicos?