Sometimes we get intrepid travellers who find us because they want more than a half day trip. They want real adventure, off the radar, away from the noise. They have the skills; they just need the equipment and the local information to do it safely and while hitting the top spots. Anthony reached out about extended range kayaking and our kayak team; spear headed by Mark Parrish set him up.

Check his story out. It’s cool and even if you don’t go for five days, explorer deeper and further is so worth it.

“Silently drifting through enchanting mangroves, my kayak attracts the attention of sea turtles, baby sharks, and a plethora of feathery friends. The sun kisses my skin as I breathe in the fresh salty air of the Caribbean Sea – life is good.

For 5 days, I immersed myself in the exceptional natural beauty showcased by Turks and Caicos thanks to some guidance and friends from Big Blue Collective. Trading the cold and snow of Canada’s harsh winter for sun and warmth, I spent my time paddling and sleeping in an exquisite landscape. With fair weather and a trusty touring kayak, I eagerly explored the Cays, east of Providenciales, and a portion of North Caicos.

Hoping to interact with as much wildlife as possible, my call was answered as I dined with iguanas, watched the sunset with Ospreys, and had a delightful night-time walk alongside adorable dwarf boas (the world’s smallest constricting snake) and barking geckos. When adventuring solo into the wild, sights and sounds are enhanced as nature puts on a spectacle, reserved only for those willing to immerse themselves completely:

On day 1, after my first leg of paddling, I laid down on my camping mat and fell asleep to the sweet melody of cheerful birds, welcoming me into their world.
On day 2, I discovered hues of blue I didn’t know existed as I paddled between the Atlantic Ocean and the Caribbean Sea, before landing on North Caicos Island and discovering some lovely nocturnal critters.
On day 3, I softly rode the tide through mangroves while an inquisitive Reddish Egret spent 20 minutes hovering closer and closer to me, as we peered into each other’s eyes.
On day 4, I stepped out of my tent and dipped my feet into the warm sand, listening to waves crashing against the beach while admiring a double rainbow piercing cotton candy like clouds.
On day 5, I enjoyed the sunrise as I paddled alongside countless sea turtles, watching them glide around my bright yellow kayak and teasing me as they popped their little heads out of the
water.

These moments, and many others, were enhanced by the style of my trip as I chose a tent over a resort, a kayak over a car, and a campfire over a kitchen. For those willing to seek a bit of
discomfort, the rewards are beyond measure and the memories are priceless. Alas, all good things must come to an end… but not before treating myself to one of Big Blue’s Edge of the Banks snorkel tours. During this delightful day out at sea, we visited picturesque reefs teeming with bountiful marine life including manta rays, sharks, and turtles. We also had a chance encounter with a mother humpback whale and her calf, allowing us to respectfully interact with them in the water – it was difficult to contain my giddiness! And, to top it all off, a pod of dolphins popped out of nowhere at our last snorkeling site, playing and dancing with us for what seemed like an eternity. 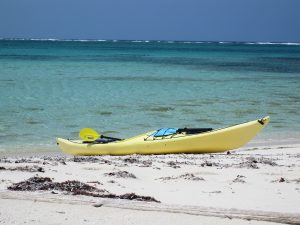 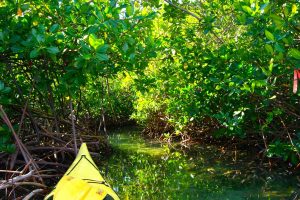