Marine mammals of the Turks and Caicos: Everything you wanted to know about our whales and dolphins 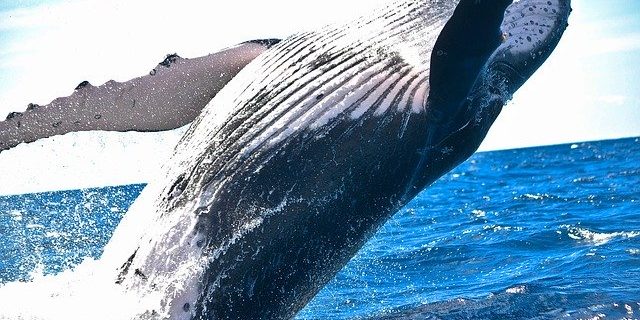 Whale watching is one of those activities almost everyone has on their bucket list. And, as the Big Blue Collective knows so well, there’s few places in the world more perfect to experience the whales of the Carribean than the Turks and Caicos. From dolphins to whales and everything in between, we take a look at the fun that awaits you.

While whale watching has a season in the Turks and Caicos, dolphin watching is an activity you can enjoy year-round. While they lack the size of their massive cousins, the displays you will see are no less spectacular, believe us. If you’re keen to head out to the reef, or any of our other top-notch snorkeling spots, you’re sure to find an inquisitive nose or two in your business! They often follow the charter boats too, hoping for a little attention. In fact, dolphin watching can be done anywhere where the water is deep enough for them.

The most common dolphin you’ll encounter in the TCI is the Atlantic bottlenose dolphin, but we do occasionally see Atlantic spotted dolphins, too.

The Big Blue Collective, and the TCI at large, love our gorgeous natural heritage. With that in mind, although we all love dolphin watching, there’s no ‘dolphin experience’ falsely manufactured here. Instead, you’ll have the unsurpassed chance to see wild animals in the natural habitat, with natural behaviours.

Spotting a pod at play may well be the highlight of many trips on the water. Don’t forget to look out for JoJo the Dolphin too. Often gracing the waters between Grace Bay and Pine Cay, this unique dolphin is far more ‘tamer’ than his wild compatriots, and loves interacting with people. He’s been declared a national treasure in the TCI, and was first spotted in 1989. Despite that, he’s still going strong today.

Whale watching- the TCI experience of a lifetime

The whales of the Turks and Caicos are one of the most exceptional sights you’ll ever see. Gentle giants at play in the water, enjoying the change from the icy-cold North Atlantic water to the warm waters of the Caribbean.

They’re on the way to their spawning grounds, and the unique structure of the TCI means they can only pass through a relatively narrow channel of water. Despite the fact these pods originate globally, they all pass through the area every winter. Europe, Canada, Iceland, Greenland, The Arctic Circle- it doesn’t matter where the pod comes from, they’ll be passing the islands. The area can be thought of as one big nursery, with welcoming warm waters and shallow banks more hospitable than their normal icy homes. This is just about the only area where they will all be funnelled into the same waters, so what can be more intermittent sightings in other areas are almost guaranteed here. Stretching from the end of December to early March, whale watching season is a time like nothing else.

Tell me more about whale watching in the Turks and Caicos?

At the Big Blue Collective, we like to take an ethical approach to whale watching. We don’t chase these gorgeous mammals down, but instead allow globally accepted standards for whale interaction to govern our approaches. This means an ethical and gentle experience that will be far more productive than inflaming or scaring off a whale by stalking it or harassing it. Memories that will last a lifetime have been made this way, so we know we’re doing something right, and our private charter clients have enjoyed many memorable whale encounters. On dive trips, many guests are lucky enough to be able to hear whalesong, a haunting experience you’ll never forget!

What are the whales of the Carribean?

The famous whale migration is undertaken by members of the Humpback Whale species. This makes them on of the most iconic whales of the Turks and Caicos, and the species you are most likely to encounter at play in the water, especially during migration season.

They’re not the only whales to call the area home, however. Baleen Whales can also be found in this area of the Caribbean. Likewise, the common minke whale, Sei whale, Bryde’s whale and blue whale can all be spotted here, although it’s more likely to be a single individual or family than a large group. There’s a few other, rarer, whale types that can be found, too. Two species of beaked whale, the melon headed and sperm whales, pilot whales and the infamous Orca, or killer whale, have all made appearances here. It’s part of the beauty of the sea, that so many different species can easily travel where they will through the gorgeous waters.

The whales of the Turks and Caicos offer some of the most perfect whale watching in the world. Combine whale- and dolphin watching with your other watersports, and you’re sure to be rewarded with a treat like no other. With the Big Blue Collective on hand to help you get the very best from the experience, you’ll be making memories you’ll never forget.