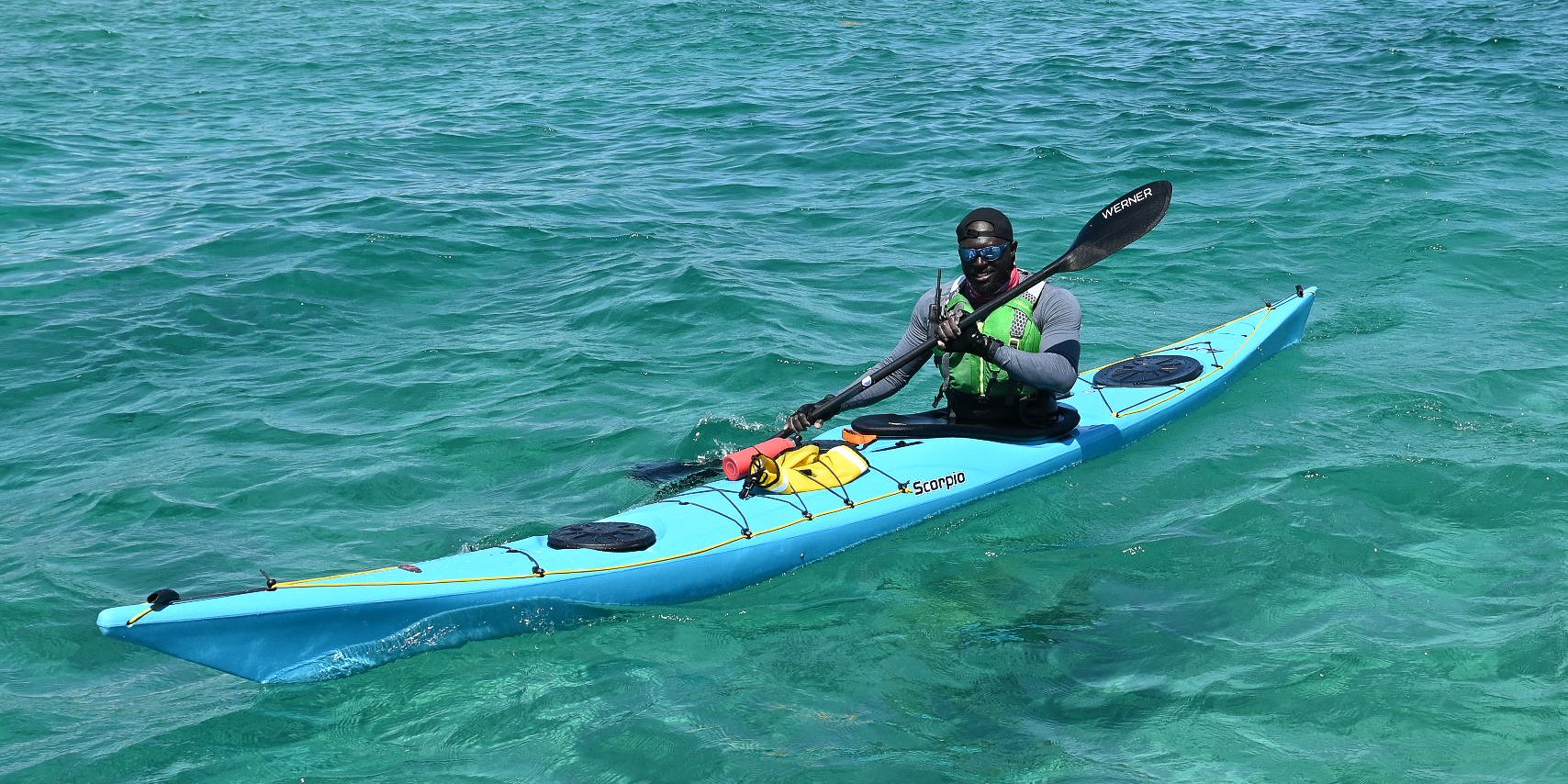 When Eco-Explorer Mario Rigby decided to return home to the Turks and Caicos Islands and cross the archipelago under his own power, he did not realize just how much of a physical challenge this would prove to be.

In 2015, Mario had set out from South Africa on foot to traverse the continent and 2 ½ years later he arrived in Cairo. Embracing his new life an eco-explorer, Mario is certainly not shy of enduring some pain and hardship to achieve his goals. We first teamed up with him for a memorable hike across West Caicos in early 2020, and it was soon after this that he pitched his idea of crossing the entire Turks and Caicos chain.

With our decades of experience exploring these islands ourselves, we knew we would be well placed to assist him and lend some advice where needed. Mario and his team handled the local and international PR. Big Blue handled the logistics of getting our chase boat and two touring kayaks to the start point on Salt Cay and then shadowing him on all the marine legs to keep him safe.  Paddle, run, swim, and bike were the disciplines that Mario chose to use, and he wanted to do it in 5-days!!

He dubbed it the Caicos Challenge.

And a challenge it was. The shortest leg from Salt Cay to Grand Turk was a warm-up day in many respects. Especially before the long gruelling kayak across the Turks Passage, a 25-mile slog of deep rolling seas, which was always going to be tough. Mercifully, Mario was blessed with some favorable conditions to assist him on this leg. But it was the third day that posed the biggest challenge.

It was both distance and difficult terrain that Mario was up against in attempting to traverse from South, to East, to Middle Caicos in a single day. He first paddled and run from the northern tip of South Caicos along the cays towards East Caicos. Once there, not only did Mario have to cover the entire east and north coast of this large uninhabited island, which is difficult enough, he then had to swim and hike his way across Joe Grant’s Cay, Dickish Cay, and the Windward-Going-Through. It was well after dark when completed this 25-mile leg and arrived on the isolated shores of Middle Caicos in an area known as Wild Cow Run. What a shame he could not appreciate the true beauty and vibrant colours that this exceptional part of the islands has to offer. It’s an area we love and know so well.

Biking from Middle to North Caicos must have felt like a breeze in comparison, but when Mario arrived at Sandy Point to begin the 10-mile alternating swim and run along the Caicos Cays, it was clear the journey was taking a toll on his body and his mind. The currents that run between the cays do not make for easy crossings at the best of times. But when you’ve spent the previous 3 ½-days racing yourself all the way from Salt Cay, these channels would have felt more like navigating the mouth of the Amazon.

As Mario arrived on each of the inhabited cays and islands he was greeted with cheers and applause. He is such a gracious and likeable guy, it’s easy to see why he is so beloved. The fact that Mario had come home to highlight the diversity of his native islands to an international audience and done so in the middle of health pandemic, only served to enhance his status as a national icon. His biggest reception came on Provo and for his final leg over land he was joined by a number of fans and supporters. Most drifted away when he hit the shores in SW Provo, but one hardy soul kayaked all the way to West Caicos with Mario to see him over the finish line. Great job.