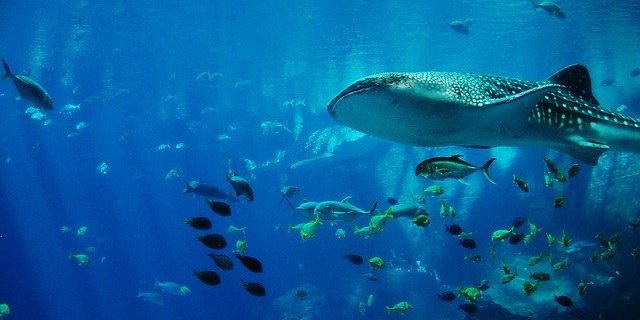 Almost every visitor to the islands knows that whale watching in the TCI is simply fantastic. However, it’s not just the whales that make exploring the wonderful undersea world of Turks and Caicos fish such an exciting experience. From friendly dolphin pods to up-close encounters with tiny sharks, the TCI offers a wealth of spectacular marine sightings.

Did you say sharks? Isn’t that dangerous?

You might be surprised that we said ‘sharks’, given that snorkelling in the Turks and Caicos is such a popular activity. Sharks are a common sight throughout the Caribbean and a sign of the health of the marine environment. Grey reef sharks are a common sight around the TCI barrier reef, and you’ll spot nurse sharks and young lemon sharks at play in the wetlands.

That doesn’t mean you should get concerned about shark attacks, however. There’s never been a shark-related fatality in the Turks and Caicos, and very few attacks- only 3 on record. Shark attacks are typically caused by ‘mistaken identity,’ where the shark sees human movement through murky water with little visibility. Despite being some of the top predators in the oceans, sharks have exceedingly poor eyesight. This causes them to bite at anything they think is legitimate prey. By nature, they’d rather avoid an ‘aggressive’, non-food species like humans, and do not strictly ‘attack’ humans at all. Take just one look at the crystal clear waters surrounding the Turks and Caicos, and you’ll understand why these attacks typically don’t occur in the Carribean area.

If you’d like to get to know more about the wonderful world of sharks, why not swing past the Princess Alexandra Nature Reserve on Provo? Here you’ll have a chance to experience tiny sharks, and you can even Stand Up Paddle Board through the area to see them up close. The sand bars and mangrove channels of the area often trap sharks in deep water pockets until the tide turns favourably.

Dolphins of the Caribbean

Not keen on meeting these apex predators for yourself? Then why not spend some time getting to know the dolphin pods of the Turks and Caicos? If you want to experience snorkelling in the TCI, you’re bound to find a few inquisitive souls coming to help your experience along! Atlantic bottlenose dolphins are the most common dolphins in the TCI, but you’ll also see the occasional Atlantic spotted dolphin too.

In the interests of preserving this unique marine habitat, there are no manufactured ‘dolphin experiences’ in the TCI. All encounters are in the wild, allowing natural behaviour in their home habitat.  You’re best chance to encounter these friendly beasts will be through chartered sailing tours or as you snorkel the sights of the Turks and Caicos. Dolphins can be encountered anywhere the water is deep enough for them.

While you often spot small pods at play, there’s also a chance you might meet JoJo the dolphin too. They can often be found swimming the waters between Grace Bay and Pine Cay. Unlike many wild dolphins, Jojo loves interacting with humans. He was first spotted trailing boats in the Grace Bay waters and was declared a national treasure of the TCI  in 1989. He’s still going strong today, so be sure to keep your eyes peeled!

Whale Watching in the TCI

Whale watching in the TCI is perhaps one of the most rewarding experiences you’ll ever have. The chance to experience these massive, gentle giants as they frolic, breach, tail slap and enjoy the warm waters of the Caribbean on the way to their spawning grounds is one like no other.

Every winter, pod after pod takes off from their cold northern Atlantic feeding grounds for the warmer waters of their breeding grounds. Although it’s exceptional to think of, pods from all over Europe, Greenland, Canada, Iceland and the Arctic Circle converge on a small region of the sea near the TCI. Shallow banks and warm waters make this a hospitable area to birth their young and mate, far better than the frigid waters they’re leaving.

Why is whale watching in the Turks and Caicos so iconic, however? That comes down to the geography of the area. While there’s huge stretches of open sea along each pod’s journey, they don’t have the same choice of routes when they reach the TCI. The continental shelf on which the islands lay forces them to funnel through a (relatively) small area of sea between Salt Cay and Grand Turk. This greatly improves our chances of spotting these majestic creatures at play exponentially. If you’re really lucky, you’ll spot a few calves swimming along with their mothers, and pods of five (or more) whales are common sights. From the last days of December to the early days of March, your chances of spotting a pod on their journey are super high.

Here at the Big Blue Collective, we believe in ethical, responsible tourism that delights the heart and preserves the natural beauty of the Turks and Caicos for future generations. That’s why we subscribe to globally-accepted conventions governing gentle, productive ways to approach migrating whales. This not only ensures a safe, ethical experience for everyone but also vastly improves your chances of a spectacular whale watching experience in the Turks and Caicos.

Whether your heart is set on whale watching in the Turks and Caicos, you’re interested in the Turks and Caicos fish and their bigger cousins, or you are just looking for superlative snorkelling in the TCI, the marine life here is sure to wow you with its spectacular nature. Why not let the Big Blue Collective help you shape the marine wildlife experience of a lifetime today?