What’SUP? The Brief History of Paddle Boarding You Didn’t Know You Needed 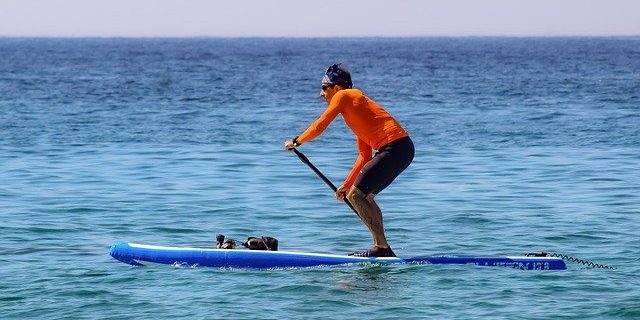 How much do you know about stand up paddle boarding? Don’t worry, there’s no test at the end! However, the Big Blue Collective team firmly believes everyone should try this simple and incredibly rewarding sport for themselves. There’s nowhere better than the beautiful Turks and Caicos, after all! Here’s a quick look at the many interesting ways the sport has been shaped, from history to ultra-modern construction techniques.

Looking at the high-tech gear and setup, we wouldn’t be surprised if you thought stand up paddleboarding was a modern invention. After all, how could it come into being without all the fancy materials, inflatable tech, and top-end plastics?

Not so fast. The roots of stand up paddleboarding are surprisingly ancient, actually, and you don’t really need all the fancy gear to enjoy the sport (though it’s super-nice to have). In fact, stand up paddleboarding is so old we can’t say it was ‘invented’ by any one person. Who was the smart soul who thought ‘let’s make a floating platform and steer it with a pole or paddle’? Stand up paddleboarding has been a staple of tribal island nations for millennia, even if it looks very different from today’s holiday sport.

There’s records of Peruvian fishermen using something they called Caballitos de Totora as early as 3000 BC. While the ‘board’ was made of reeds (and rather unstable) and propelled by a long bamboo pole, it was still recognisably similar to today’s sport. Accounts tell us they would cruise the waves for fun after a hard day’s work. We also have records of spear-propelled canoes used as a war tactic in Africa, and Arabic fishermen using a paddle board-like vessel called a Hasake to catch fish.

The true roots of the modern sport, however, lie with the ancient Polynesians. They’re already credited with the invention of ‘true’ surfing, as well. Although it was only noted to history when Captain James Cook landed on Kauai on January 18, 1778, surfing was already central to the islander’s culture for millennia before. The Chief’s board- for the Chief was expected to have the best craftsmanship and the most skills-  could be over 15 feet long, so sometimes needed a paddle to help move it through the water.

Of course, we didn’t see a bunch of 18th Century Europeans rush to take up paddle boarding. So when did the modern version of the sport get traction?

Hawaii is still the birthplace of modern stand up paddleboarding, however. Legend has it that in the 50s or 60s, Waikiki surf instructors Leroy and Bobby Ah Choy saw their father, who had recently suffered a knee injury, standing up on an oversize surfboard in a hard hat and knee pads. The brothers, along with Duke Kahanamoku, were looking for better ways to photograph their surf students (and, incidentally, keep their smokes dry). Seeing good old dad as inspiration, they became a common sight in the bay, cameras around their necks and cigarettes in hand.

Over time, more surfers would join in, but there was no major movement for decades. When Laird Hamilton, well known as a daring big-wave surfer, started to use it as a type of cross-training perfect for low surf days, however, there was a magical moment waiting to happen. With a huge U.S flag stuck to his paddle, he would be photographed in September 2002 while in a six-foot swell in Malibu, California, and suddenly the whole of the surf world was curious.

One iconic picture later, and the modern sport was well and truly born.

But wait, there’s more! Rick Thomas would bring back a modern paddle board from Hawaii to California 2 years later, in 2004, and from there the sport really began to grow. He had a custom paddle made for his 11-foot Munoz surfboard. California had no idea what to make of this sight, but they were keen to join in.

After all, unlike ‘proper’ surfing, stand up paddleboarding didn’t need a cooperative ocean- any body of water would do. No need to stay tied to crowded surf breaks- you can simply paddle off to a spot you love. And while it still takes a degree of fitness, and a lot of skill if you like tricks, it’s a lot more accessible to a wider range of people than traditional surfing.

Today the sport is booming. We even see stand up paddle board races and yoga classes. People have taken to white water paddling spots, and you can have fantastic SUP experiences across the globe. It’s caught on in a way many water sports don’t- but give it a try and you’re sure to see why. Fun in the sun never looked so intoxicating.

Learn to Paddle Board with the Big Blue Collective

Are you keen to try this fun and accessible sport for yourself? The Big Blue Collective is proud to offer a wealth of quality training in stand up paddle boarding for all interested visitors. With its flat, warm, and welcoming water, the Turks and Caicos is the perfect destination for new beginners and experienced SUPers alike. From gently sculling over our bays to enjoying the twists and turns of the mangrove backchannels, you’re sure to fall in love with the sport the way so many others have.

Why not learn to paddle board today? Our friendly and helpful team are always on hand to help you become the best you can possibly be, so get in touch today.